skip to main | skip to sidebar

It is nearly two years since I have written in this blog.  That is largely or entirely because I have been addicted to Facebook for the past few years!  There is far more interaction, response, it is more instantly rewarding, and I do like instant gratification!  Uncle Maurice has just died, aged 99 and nine months, and I knew I had posted a blog or two about him.  I have therefore been looking back at some of my posts.  They represent an interesting recap of some of the things that have happened, my craft work, and my thoughts.  I could have left  out the 3 beautiful things posts though, nice idea, but a bit long winded. 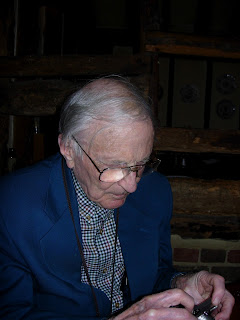 I feel sad that my lovely uncle has died, and cross with him for depriving the family of a happy get together for his 100th birthday!  However, he was ready to go, he had not been fully  aware for the past two years.  In his nursery, which he ran for many years, he particularly grew cyclamen.  Simon bought me a beautiful white cyclamen on Saturday after we heard he had died during the night.  That made me howl, but was just perfect.  This picture is of Uncle Maurice, aged about 96.  He was a thinker, he thought I was incapable of thought and we had minor bickers all the time.  He dismissed anything he knew nothing of, Facebook was 'rubbish' for example.  He was a writer, he wrote until the last couple of years.  I always adored  him and will miss him dreadfully, although I have missed him already for the past couple of years when he has been in a care home and not really aware of the world around him.

I may try to write in here more often and link it to Facebook somehow...
Posted by Michael House at 04:54 No comments:

Although it is many months since I have posted on this blog, this does not mean I have been entirely uncreative, just that I have not written about it!

The craft event to which I refereed in the last post did not happen.  Thank goodness really, as we were so busy with the guest house, that I did not have any time to make things in the summer.

However, we did have a stall at an event in Exeter at the end of November.  This galvanised me into making a lot of Christmas cards and some lovely little doves as decorations.  But, the sales were not good, but we did promote Michal House well and that part was a success.  i think the cards did not do well, as there were charity cards available at vastly cheaper prices.  I thought my work was actually pretty good!  if we do that event, organised by Animal Aid, in the future, I will have a smaller stall and focus on promotion of the guest house, with a few cards available.

I am currently engaged int eh endless task of sorting things out in my craft room, getting rid of lots of magazines on Freecycle etc.  then I must make a load of cards to sell over the summer, when we do tend to shift quite a few.
Posted by Michael House at 15:45 No comments:

Making things has really taken a back seat whilst I am so busy with the guest house.  But, we have a local exhibition coming up and I must make cards and such like for that.  So, need to get myself into gear a bit, but the garden is also desperate... 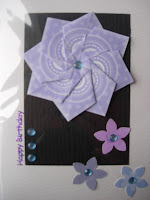 This blog has been hijacked by the animals, they now have their own blog, then hijacked by my travels into veganism! No more, both have their own blogs, so this one can focus once more on creativity.
Our craft group in Treknow is great fun, and we have covered a lot of topics, we are trying to keep a focus on one at a time a bit more now, as we all have lots of partly made items at home! We have been exploring still life, but not from a conventional perspective. We had to make the components from torn or cut papers and plastic, and then take a section of the result and paint this. I enjoyed the process at first, but became distracted and chattery - it is impossible to talk and create at the same time as both tasks need the opposite sides of the brain to function! So, that one went in the bin and I then concentrated on making a few watercolour cards in my usual style, with hills and the like. Quick and easy! 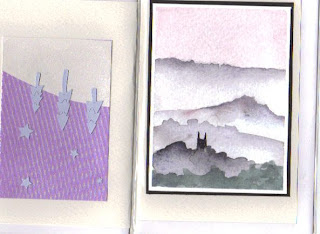 I should have cropped the other, upside down card out of this before adding it!
Posted by Michael House at 06:27 1 comment:

So, I have now been vegan, almost properly, for over a month. It begins to feel normal, and hasn't caused any major problems. I have felt awkward, for example refusing cakes people have lovingly made, this feels rude, and i have had to continue to taste test some of the vegetarian foods i have cooked at Micheal House.

A fun new social network, www.volentia.com which is for vegetarians and vegans is helpful and provides links with other veggies and vegans.

The funniest answer i have received so far, when asking if any cakes were vegan in a cafe we love visiting was 'no, they all contain chocolate'.

Quite apart from the butter and milk etc. many of them obviously contained, they did not all contain chocolate!!!
Posted by Michael House at 15:21 1 comment:

Just trying writing that out! I am still vegan, with the odd unavoidable lapse, but am sticking to the mantra, 'I am vegan for today'.

It seems that moving towards veganism is more of a process than an instant state of being. For a long time I have thought I 'ought' to be vegan. It is the logical point to aim at from being vegetarian. There can be no milk or it's products without cows having calves, half of which will be male. They are mostly either considered a waste product or raised for veal as I understand it. Eggs lead to the same problem, there are many male chicks born which are seen as no more than a by-product, and hens rapidly come to the end of their useful laying lives. Dairy cows often live their lives in large sheds, not grazing the fields as we like to imagine they all do. They are engineered to produce around twice the milk they would naturally make for their calves, from whom they are torn. I do not want to be part of supporting this cruel industry, of lives being no more than a waste or by-product. The environmental issues are compelling too, but to me, only as a supporting one for the animal welfare case.

But, I love food, I adore nice cheesy dishes, cakes, eating out. Will I just have to accept my life is less food focused and replace my delight in eating yummy things with going to the cinema or something? It seems that, at present at least, food is even more of a focus, making sure I get plenty of nice things, checking labels, etc.

Running a vegetarian guest house raises it's own problems. I do not plan, at this stage at any rate, to make the guest house fully vegan. I therefore have to accept I will need to taste some dishes. Will I find myself with rather large taste test portions?!

Being vegan ought to be a gentle, non aggressive option. But, it seems it is the opposite in some ways - it raises uncertainty, discomfort, questions, defenses. I do not want to be seen as difficult, I do not want to be the centre of an awkward scene in a restaurant as I question ingredients and eyebrows get raised higher and higher. Being organised and arranging vegan meals when booking will doubtless help with this, and I have already been pleasantly surprised by the extent to the knowledge of one pub's staff recently.

It seems that it is more acceptable to have allergies or health reasons to be vegan than to do it for ethical reasons. We recently went to our local Indian restaurant. As I had only been vegan for a few days, I would have felt a fraud to say I was vegan, so I asked for dishes that were dairy and egg free. They told me the ones we had selected were dairy and egg free, but that one of them contained almonds. I was flummoxed for a moment, wondering what the relevance was. Of course, they thought I had an allergy to dairy products, and that I might also have a nut allergy. It seems rather sad that the health considerations of the individual are more recognised and valued than consideration for other creatures.

Another issue is waste. I am still cooking eggs for guests for example. Sometimes these break when I am frying them. I usually eat the broken ones. I cannot now do this. Is it worse to give the dogs yet more treats than to eat it myself?

Will I be able to keep making felt? I am only just getting into it, I have already stopped painting on silk, I do not want to give up using wool in felt making. I recognise each person has to do what they can, there are no absolutes. But, I know how I feel about 'vegetarians' who eat fish. Is a vegan who makes felt similar? Or, is it better I go as far as I can, possibly extending the process as I go, rather than becoming trapped and ending up not doing any of it?

There will be many more questions raised I am sure, and I will keep to 'vegan for today' for now and see how it goes, reporting here. Ooh, I am hungry. We have the most yummy bramble jelly made by Dawn, which goes very well with the homebaked bread, and the little bit of soya marge I use instead of butter, should mean I start losing weight...
Posted by Michael House at 03:07 2 comments:

Please also have a look at

http://www.therealmichaelhouse.blogspot.com/ - written by the animals, telling how it really is!

Michael House
I run a vegetarian and vegan guest house in north Cornwall, with my long suffering husband Simon, who also has a tree and garden businees and often has to help here when he gets home! We love the contact with people the guest house brings and providing people with good food and a relaxing environment. I have just become vegan (Sept 2009) and am trying to link with lots of vegans to find out how to do it! I love making cards and painting, and felt making (hm, will have to rethink this to use soy and bamboo fibres eventaully) is my passion of the moment. Our animals are very important to us and tend to take over my blog. They have April 2009) been granted their own blog, in which Ted the cat will tell all the secrets we didn't wish to share and the dogs will talk about how lovely everything is! 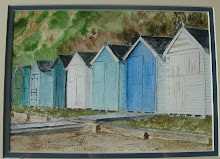 fish rising to the surface, felted on embellisher machine 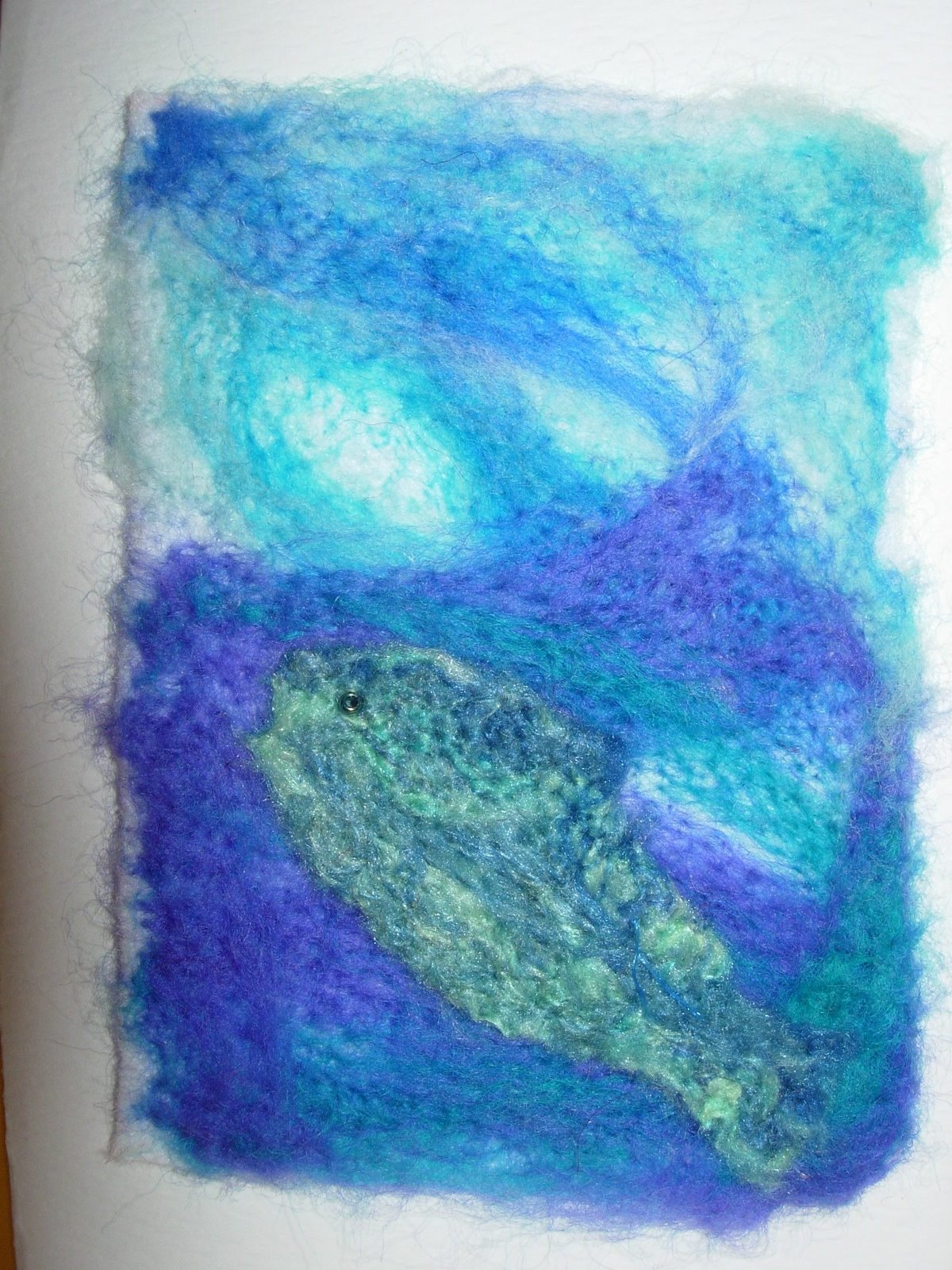 bag made from felted jumper 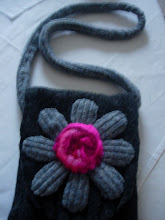